On June 18th, the China Coating Industry Association’s Iron Oxide Branch met in Shunde, China to discuss prior market performance and the outlook for China’s iron oxide industry. The first part of the meeting focused on 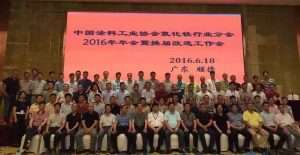 the industry’s performance in 2015, where the industry reported declines in total import-export (-7%), exports (-1.8%), and imports (-7%) over 2014 levels. Still, with these declines, the industry’s economic output accounted for 660,000 tons last year. The Association also noted that, between 2010 and 2015, China’s struggling economy, environmental issues, and other factors resulted in the closure of 32 companies throughout China.

The Association also recommended that Chinese iron oxide producers reinvest in their corporations, with an emphasis on what they referred to as “green and clean production,” in other words, a focus on energy efficiency and meeting the strict environmental standards. To this end the Association advised iron oxide producers to utilize the “three wastes” system and to constantly develop new technologies and new processes in order to meet the environmental standards.

As for 2016, the Association does not foresee industry growth in either the domestic or international markets, but assert that capacity should maintain existing levels for the remainder of the year. They are attributing current market conditions to a significant decline in real estate construction, which will result in a decreased demand for iron oxide in 2016. This has the potential to extend to iron oxide exports, where the Association expects 2016 exports to remain flat or possibly fall below the 2015 levels.