On behalf of the entire Yipin USA family, we would like to congratulate Ted Warner on his fifth-year anniversary at Yipin USA! 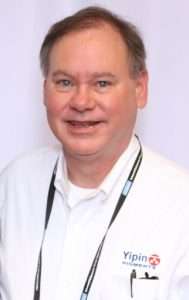 Our clients in the South and on the East Coast are probably quite familiar with the name, as is the case for those of you who happened to stop by our booth at one of many conferences around the United States.  Still for those of you who have never had the opportunity to meet Ted, here is a brief bio.  Ted began in the Pigment Industry in 1987 as a Territory Sales Manager where he earned high marks, including an award for the Top Sales Representative in 1995.  After 16 years, with two different companies, Ted left the sales world to take the helm at a cargo company specializing in pigments.  He served as its President for six and a half years.  While he enjoyed the job, he nonetheless longed for the relationship building that only comes with direct sales, something which only a salesman can truly appreciate.  This longing led him to accept a position as a National Sales Manager.  After three years, Yipin USA managed to coax him away from this position with the promise and challenge to build our business in the South and on the East Coast.  Serving as our Regional Sales Manager for the last five years, he has constantly exceeded our expectations; solidifying our footing in his region and making him an integral part of the Yipin USA family.

In a time where employees come and go with the tide, it’s difficult to imagine that you can find any employee that can be as dedicated to the industry and to a company, but we were fortunate to find such an employee in Ted Warner.  On behalf of everyone at Yipin USA, we would, once again, like to thank Ted for his service, and we look forward to another five, if not ten, years of service.

We encourage all of our customers to reach out to Ted to congratulate him on this milestone, and also let him know of your pigment needs.